Full article linked above.  Coke workers are real people, with real families.  Nobody wanted this lockout.

In the face of such a colossal battle, it is hard to keep spirits up and pretend life is hunky-dory.

Coca Cola locked out its workers on June 26th, hours before the strike deadline. That’s 2 weeks ago tomorrow. Since then they have done nothing but ignore the Union requesting they return to the negotiating table, and post complete fabrications of why they did it. Finally, today, they have agreed to resume talks. A good step, but we’re nowhere near an agreement.

Coca Cola claims that the Union walked away from them. Not true. They claim that the union is unreasonable, and wanted staggeringly ridiculous amounts of increases. To everything. Come on. Do they really expect anyone to believe that? Well, yes. In fact they do. Coca Cola apparently really does think that the general public is that naive, and will believe anything they state as fact. Why? Well, because they’re COKE, of course. One of the biggest corporations on the planet! *insert beating chest noises here. Gorilla grunts too, for good measure*

They even sent a letter to the employees outlining the demands they say the Union made, and expecting the very employees they’ve locked out to believe it! The level of audacity here is off the charts! 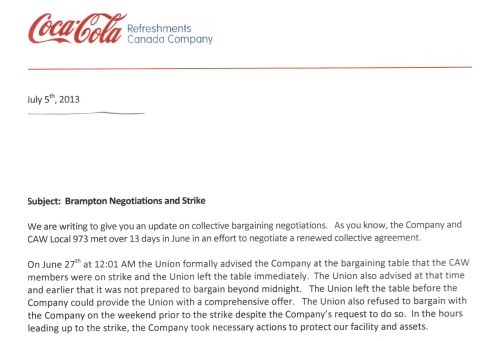 Want a laugh? Here’s Page 1 and Page 2. You might notice that they don’t provide a way for their employees to actually call and speak to someone. Or even email them. They’ve completely stripped their letterhead of contact info.

No sane person would ever ask for what the company claims the union is asking for, when we all agree the current wages and benefits are fair. The guys get statutory holidays – they’re not asking for more. They get a reasonable amount of sick days, and don’t need more of those either. The only thing our people are truly concerned about is improving the safety of the workers in the Brampton plant, keeping pension and benefits generally as they are – including those for new hires (Coke doesn’t want more Full-timers, and they don’t want anyone new to get any pension) – and ensuring there will still be jobs to come back to, instead of Coke outsourcing those jobs. There are no doubt other adjustments that I’m not privvy to; I’m neither a union member or Coke worker. I can say with confidence though, that the union is neither greedy, nor stupid.

I worry about finances, first and foremost, since that income is lost, and there’s a mortgage and other bills to pay. Hard on what we’re bringing in right now. We’ll be ok, because I am my father’s daughter and had rainy-day funds put away “just in case”. What I can do to stretch a dollar is pretty impressive, if I do say so myself.

Some summer plans have been postponed or canceled, in large part because walking the picket line is so important. Our youngest daughter doesn’t seem to be noticing that too much though; she’s quite happy spending her days with the neighbourhood kids. Our oldest daughter is working full time, getting ready for College in the fall. This doesn’t impact her nearly so much.

I worry about my husband, because the stress is pretty huge. He’s gone every day, walking the picket line and trying to make a difference. He’s there longer than he’s scheduled to be, doing more than he’s been asked to do. That’s the kind of guy he is, but he’s not the only one. This is pretty typical of the kind of people who work at the Brampton Coke plant.

We have good people behind us. Community support, and also there are other websites springing into action, and also into existence. The amount of people Tweeting and Re-tweeting has exploded in support of #cokestrike. So no, Coke. The general public really isn’t naive, nor are they stupid. What they are is tired of mega corporations trying to crush unions, and erode the middle class.

My own posts here have slowed down a little, because I’m so active on Twitter these days, and because there are better websites for this sort of post. This is a personal blog, and eventually it will return to normalcy. I’m not stopping yet though – this is as much my fight as it is my husbands, and there are thousands of people affected by Coke’s actions and behaviour in Canada. Once they’re through with this negotiation at the largest Coca Cola plant in Canada, it will be on to the next Coca Cola location whose contract is set to expire. And the next. And the next. We’re fighting for employees and families across the country.